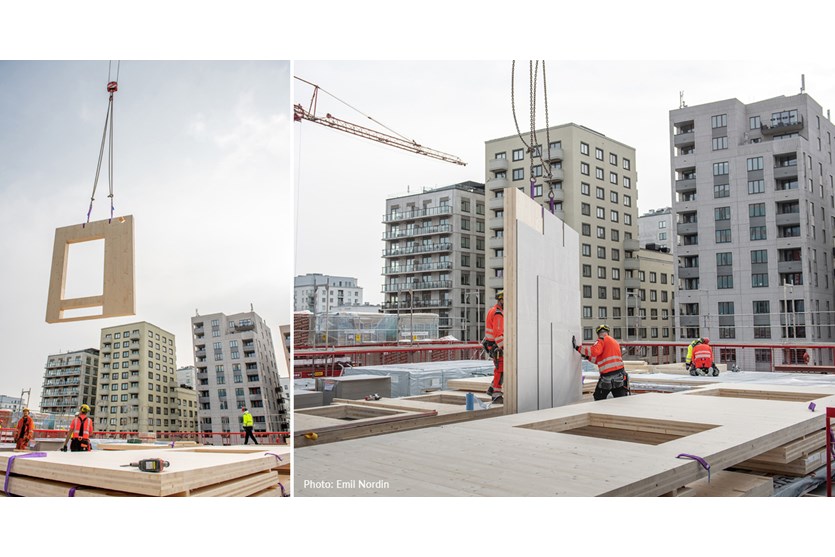 Wood products company Setra will be supplying the timber frames for the second building in the Cederhusen housing development in Hagastaden, Stockholm. The frames will be manufactured and packaged in Setra’s crosslam factory and transported to the construction site just two hours away.

Cederhusen, a Folkhem project with Veidekke Entreprenad AB as the sole contractor, will be Sweden’s largest residential development built in mass timber. The partnership with Setra began last autumn with deliveries for the first apartment block, Bologna 1. Construction has been under way since September and now the frame for the first of four buildings in the new neighbourhood has been completed. Setra’s deliveries for building two are set to begin in March and last for around 10 weeks.

“Veidekke looks forward to its continued collaboration with Setra. Being able to trigger the next major phase as planned should ensure both quality and reliability of deliveries,” says David Grimheden, technical and environmental manager at Veidekke Entreprenad.

All the components for the apartment block’s structural frame are being fabricated in glulam and cross-laminated timber at Setra’s factory in Långshyttan, in southern Dalarna. The entire production process is meticulously planned to ensure that the finished components – walls, shafts and floors – are produced, packaged and supplied in the right order. This then means that assembly on site is quick and efficient, with the building growing by around one storey per week.

“We are incredibly pleased to have again been entrusted with supplying timber frames, this time for building number two in the Cederhusen project. This is a groundbreaking project with an explicit sustainability focus – a great fit for us, as we work exclusively with wood, the renewable construction material. It is also amazing to see how much interest Cederhusen as generated in the industry and among homebuyers,” comments Daniel Halvarsson, Setra’s EVP Building solutions and Components.

Cederhusen is being built by Folkhem above the tunnels for the E4/E20 motorway, thus connecting Stockholm and Solna. The project, Stockholm’s first inner city neighbourhood in wood, comprises four apartment blocks of 10–13 storeys, with crosslam walls, shafts and floors making up the structural frame.

“Folkhem has decided to only build in wood, due to the significant climate benefits. For Cederhusen, we have engaged actors who can help to minimise the environmental impact of the development. Timber frames that offer energy-efficient production and short transport distances are a crucial factor in delivering the best outcome for the project. We are particularly pleased to have Setra on the project’s collaborative team, pushing the envelope on climate optimisation,” says Anna Ervast Öberg, Business and Project Development Manager at Folkhem.